In this short post, you will learn how to create a basic plot with Python. To create a plot we will use Matplotlib.

Matplotlib is a package used to draw charts with Python. Often it is used via Jupyter Notebook which is a web application where you can interactively write and run Python code. In Jupyter, you can see the charts directly in the browser. However, you will mostly work with scripts that create the data visualizations as files.

In many cases where charts are to be created, data is stored in data types whose structure is optimized to perform mathematical operations quickly. The package that provides these is NumPy. The NumPy package is usually imported with:

Below you will find an example of how matplotlib is used to draw a diagram and save it to file. First, you need to import matplotlib and the plot (to draw the graphics):

Second, to save the plots as .png files we use the following command:

Third, you type the following (into your script) to create the plot:

Briefly about the plot function()

The package matplotlib has a module called pyplot. In the pyplot module, the plot() function is defined that we use to draw simpler graphs.

Other libraries to use when doing data science:

Make sure to check this site for Pandas Python Tutorials, data visualization, data analysis, and many more neat guides and how-tos for programming.

That’s all! Let me know if you need anything!

Here’s a great Pandas tutorial for the beginner:

I found this very pedagogical and made it easier for me to understand SVM! Hope you enjoy it!

Hey! Here’s a tutorial video for you R enthusiasts out there! Eh, well, I assume that the data scientist use the tools needed for the job needed to be done?! Well, in this very nice R tutorial you will learn how to carry out negative binomial regression using R statistical programming environment. Enjoy!

Recently, I have asked on Twitter if there are any good sources for free and open data to use to learn Python (and R):

This was the different data sources people on twitter replied to my tweet. I have myself found this very intersting: Open Psychology data. This is a journal that describes open and re-usable Psychology data. If you are interested in playing around with personality data it can be found here. Finally, APA have link to open data sets: Data Links.

I know, the title is wrong: I gave you a huge amount of different data sources to use. Some may contain overlapping links to data but I would assume that we now have data to play around with for quite some time. Do you know any more data sources that are open and free? Please leave a comment! 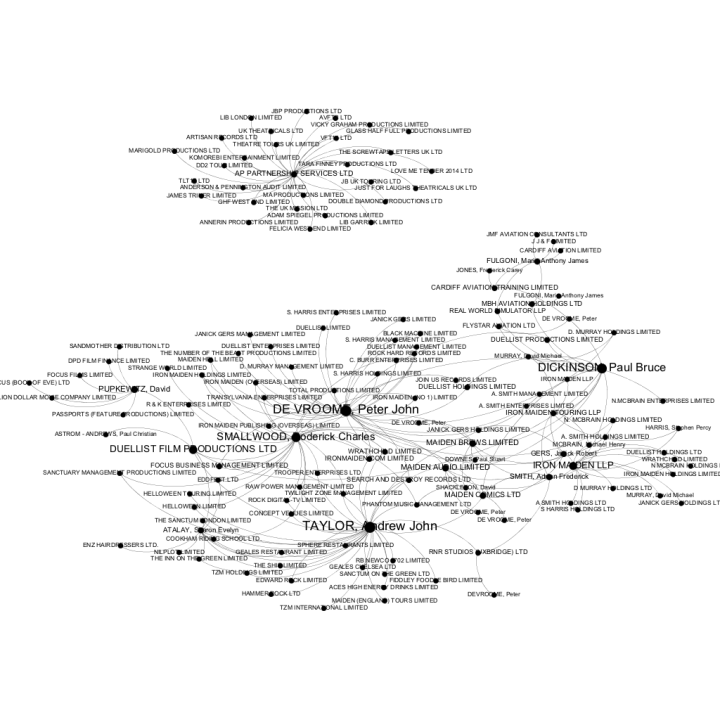 A few weeks ago, as I was doodling with some Companies House director network mapping code and simple Companies House chatbot ideas, I tweeted an example of Iron Maiden’s company structure based on co-director relationships. Depending on the original search is seeded, the maps may also includes elements of band members’ own personal holdings/interests. The […]

via Bands Incorporated — OUseful.Info, the blog…